Half a dozen neighbors have committed to growing milkweed in their yard to help with the Monarch Butterfly population--and its a good start! 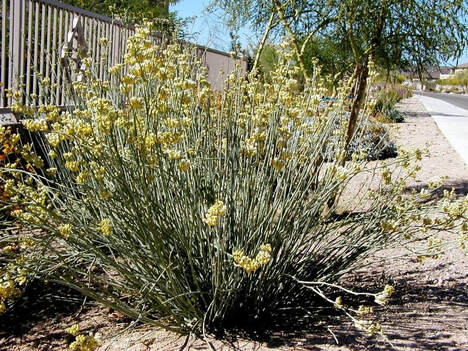 Desert Milkweed, Asclepias subulata, has long slender gray-green stems that grow upright to four feet from a woody base. The plants width can be 2-3 feet or more. Small lease 2-3 inches long by 1/8 to ¼ inch in width appear on the new growth. These leaves tend to drop quickly. The white milky sap that can ooze from the stems contains rubber. From early spring to fall the pale yellow flowers top each stem. The seed pod is horned shape and about 3” long. These pods when mature split open to disperse a silvery fluff of seeds.

The plant grows in southern Nevada, Western Arizona, California, Mexico, and Baja California. Watering: It likes moderate watering but can stand periods of drought. Excessive watering encourages succulent growth which attracts aphids which cause very little harm to the plants.

Exposure: The plants like full sun but will tolerate some partial shade for short periods. They tolerate temperatures to the low 20’s. They do attract butterflies when blooming.

​​Please contribute to the beauty of Rolling Hills Estates by encouraging Monarch Butterflies to stop by on their migratory journey each year! And maybe, let's turn Sedona into a Monarch Butterfly Sanctuary Community!

The monarch butterflies and dragonflies were being carried by a north wind tailing behind a cold front that was passing through central Oklahoma on Oct. 5.

In the image shared by NWS, the colorful patches of the map reveal the extent of the migration, with the densest areas marked in yellow and red. This is the leading end of the migration, and the additional green areas mark the rest of the butterflies trailing behind.
Radars like WSR-88D, which captured the data, transmit 10 cm electromagnetic waves at the speed of light in the form of short bursts of radio waves.

These radio waves then travel through the atmosphere and will strike any present hydrometeors, such as rain, hail or snow, causing the radio wave energy to scatter in all directions. The energy which reflects back toward the radar is measured by a fine-tuned receiver, which can then determine whether the hydrometeors (rain/snow/hail) are moving toward or away from the radar. This is known as the “doppler shift.”
But weather phenomena aren’t the only thing that radar can pick up.

According to the NWS office in Boulder, Colorado, insects rarely produce a coherent radar signature, but migrating birds frequently do, and this has to do with size. Butterflies can show up on radar only in large enough and highly-concentrated quantities — like during a mass migration when the butterflies are flying with wind currents.

Butterflies showing up on radar is such a rare occurrence, the NWS Boulder office originally guessed that a radar reading on Oct. 3 was showing a bird migration over Denver, but Twitter users quickly alerted the agency to the fact that it was a migration of painted lady butterflies.
Monarch butterflies are known for the extensive and massive annual winter migration that brings millions of them to California and Mexico. Their total migration path can be as long as 3,000 miles, and North American monarchs are one of the only butterflies to migrate such a distance.

They are driven each winter by a need to escape cold temperatures, which will kill them if they linger.
Read the Original article

Fun things about Monarch Butterflies around the web: ​